How eSports Are Transforming Video Game Publishers Into Content Companies

As the popularity of eSports grows, so do the responsibilities of video game publishers. They don’t just find themselves needing to create games and content about their games more frequently — they also have to optimize all of it for publishing across channels worldwide for maximum impact.

Here’s how the eSports industry’s explosive growth fuels the need for unique content and what video game companies can do to keep up with demand.

The competitive video gaming industry, known as eSports, surpassed a billion dollars in revenue for the first time last year. With almost a million mobile games on the market today, the average gamer is spending nearly seven hours gaming every week, 34% are clocking in at over seven hours per week, and almost 20% report spending more than 12 hours each week on eSports.

Likewise, broadcast eSports growth looks healthy. Surpassing the NFL’s 16.5 million loyal viewers, it is expected to reach nearly 300 million frequent viewers by 2022. There is even talk of including eSports in the 2024 Paris Summer Olympics! 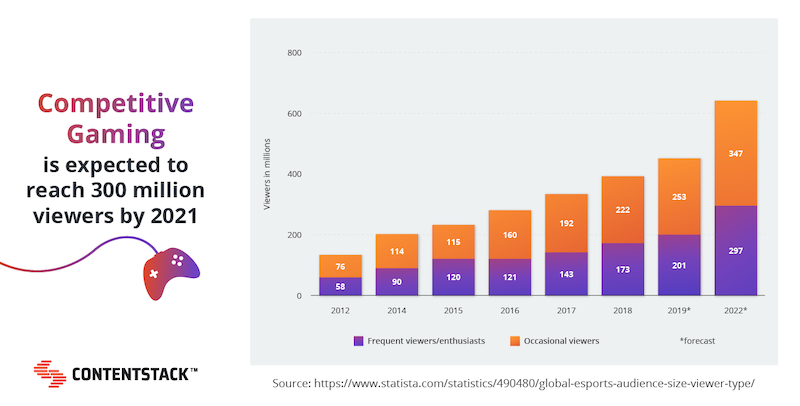 Playing and watching video games has become mainstream. Gone are the days when just creating a great video game was enough to carve out a dedicated audience and continue building a vibrant community.

To stand out in the eSports landscape, video game creators have to do something new. They must transform into content companies equipped to create and publish omnichannel content that drives engagement and attracts a continual stream of new players.

While explosive growth is mostly fantastic news for video game publishers and marketers, keeping up with it can be challenging. What they must remember is that content is the engine of the marketing machine.

Content is the always-on customer service. It is the critical differentiator available to consumers whether they’re interacting with your brand via a streaming platform like Twitch or a social media channel, website, app, smart billboard, or any of the myriad of IoT devices. 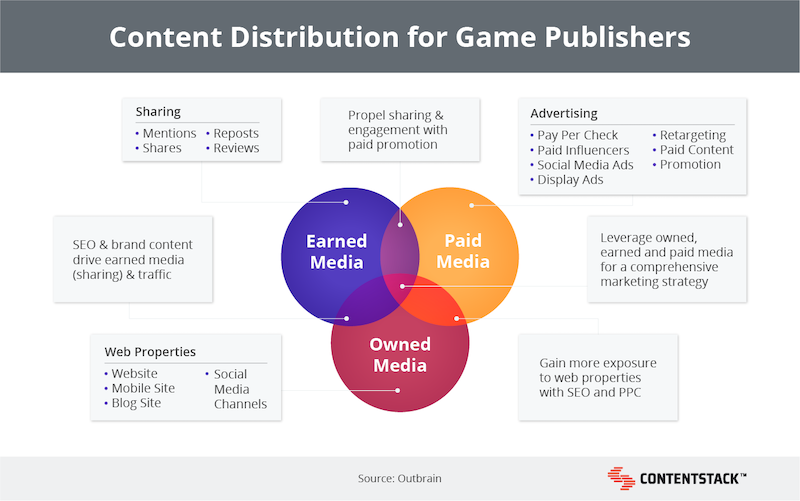 The ability to create quality content and distribute it across channels and devices is the best way video game companies can stay relevant and competitive in the increasingly content-driven industry. But how? Central to the solution is a platform designed to help game publishers and other businesses grapple with this challenge.

A headless content management system (CMS) like the one offered by Contentstack separates content from its presentation layer. This separation means marketers and other content editors are free to create, optimize, and publish content to their companies’ mobile apps, websites, social channels, and beyond without the technical team’s assistance.

Why does that matter to video game companies? Because it empowers marketers to keep up with rising content creation and distribution needs while freeing designers and developers to keep working hard on the actual games. 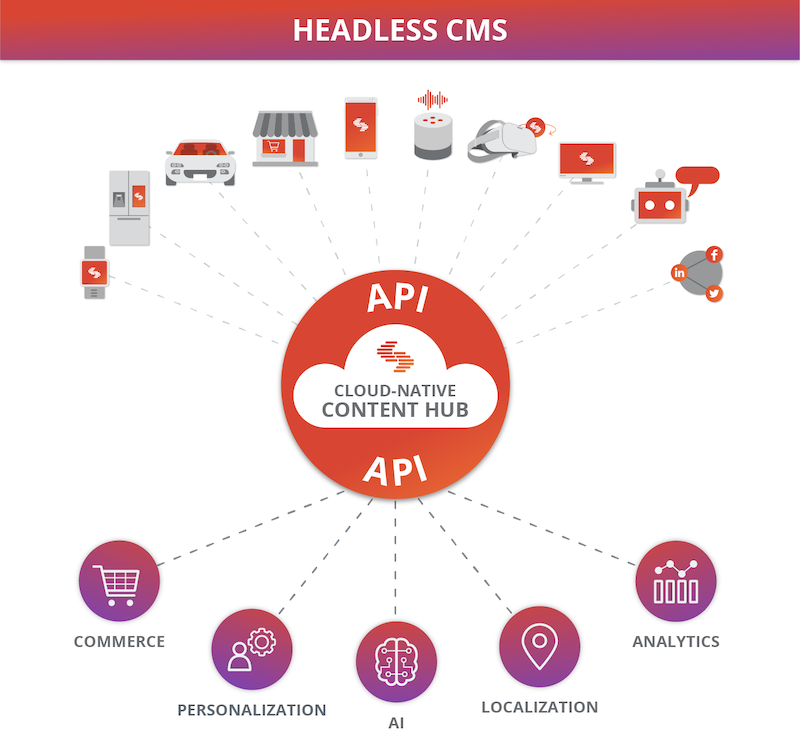 This is vastly different from the “traditional” video game company model, where a small website, called a “microsite,” is set up for each new game.

With a microsite, whenever the marketing team needs to highlight a new feature, swap out a screenshot, add a new video of gameplay, or switch up some marketing copy — they have to get a developer involved to write, test, and launch new code.

As these menial, manual development tasks add up, either the game or the game marketing has to take a backseat. It simply isn’t scalable when rapid growth is the goal.

But using a headless CMS means everyone can do their job at the speed that’s needed to achieve growth — all while improving company-wide performance and productivity.

Deploying video game marketing doesn’t have to be a massive hurdle. A former director of online project management at a large gaming company pointed out that once they launched with a headless CMS, “immediately the biggest payoff was that my engineers could go days and weeks without having to touch content at all. Other designers on the team — or the marketing folks — could go in and add images or content, and it would all go live in just a few minutes.”

Building a loyal and engaged audience doesn’t have to be a constant struggle. The following tactics will help you use content to stand out from the crowd.

When it comes to eSports, localization is becoming an increasingly important element. Localization is the process of translating and creating content for a particular geographical audience that is linguistically correct, culturally sensitive, and relatable.

Video game localization aims to prepare a game and its marketing campaigns for use in a new region seamlessly so players can’t even tell it was ever intended to be used anywhere else.

Video game content and marketing localization efforts can range from the standard:

to the more complex:

Research shows ads that integrate “natively” are 60% more engaging than non-native ads. And, generations that are more “visually inclined,” like Millennials and Gen Z, are more likely to engage with native advertising. They view it as more trustworthy and prefer it by almost 40% compared to conventional advertising.

A popular method of native advertising, dynamic in-game advertising (DIGA), allows gamers to make real-time purchases within the video game. These native ads appear throughout the game environment (think posters on buildings, billboards on the side of a highway, etc.). Because they feel more natural within the gaming ecosystem, they have increased engagement over traditional advertising methods.

Unlike with typical banner ads, native ads mean advertisers can effectively communicate offerings without worrying about annoying their audience. Video game publishers don’t have to worry about losing gamers, and gamers can play without obvious distraction or intrusion.

Digital gamers are no longer a hidden fraction of a broader community. More than 60% of eSports players report playing with others, either in-person or online. Additionally, many people enjoy watching and commenting on gamers as they show off their skills.

Creating a new community around your games will take time and commitment. It’s not something that flourishes overnight, but a vibrant gaming community is something that will, ultimately, yield big rewards.

By building a gaming community focused on sharing content that will help gamers play better will foster engagement leading to trust, feedback, shares, referrals, and downloads.

Will You Transform with the Rest of the eSports Industry?

The gaming world has evolved dramatically since Super Mario took the world by storm in the mid-80s. Today, video game companies are among some of the world’s biggest brands and are pulling in billions of dollars a year.

When you develop an omnichannel content creation and marketing workflow that enables your video game company to pump out messaging that is fresh, culturally relevant, engaging, non-intrusive, and helpful — you can start leading the pack.

Curious to learn more about how Contentstack’s headless CMS can help you keep up with the transition that is sweeping eSports? Get in touch with our team today.

Build, Integrate, and Publish Apps With the Developer Hub