In 2017, seeing the lack of buzzwords in the tech industry, Alex Richardson from Weaveworks coined a new one — GitOps. Humor aside, what started as a blog describing their operational tooling has snowballed into something bigger. Descriptions of GitOps include “the next big thing,” “versioned CI/CD,” and even “placebo.”

Shapeshifting - the ability to physically transform oneself through an inherent ability, intervention, or manipulation.

GitOps is the management of declarative systems using Git. The core idea of GitOps is to use a Git repository as the source of truth. It holds the desired state of the system and acts as a contract between various components.

GitOps tools empower the system to shapeshift based on the state defined in the Git repository. But which declarative system can effectively leverage this pattern? The answer is Kubernetes.

Over the last few years, containers have made it easy to run cloud-native applications. Containers are lightweight compared to virtual machines (VMs) and make more efficient use of the infrastructure. While container runtimes are great at managing individual containers on one host, they are not suited for managing applications running in multiple containers across multiple hosts. This type of management is where container orchestrators come into play.

Kubernetes is an open-source orchestration system that automates the deployment and management of applications running in Linux containers. The analogy of an orchestra conductor is common for describing Kubernetes.

What does Kubernetes do?

Since Kubernetes manages tasks declaratively, we can employ GitOps practices and tools for cluster management and application delivery.

An anti-pattern is a common response to a recurring problem that is usually ineffective and can end up being counterproductive. The following lists results of a common anti-pattern that occurs with Kubernetes deployment automation when the CI system tests, builds a change, and then pushes the change directly to the Kubernetes cluster.

At Contentstack, we use the GitOps pipeline to manage application delivery on Kubernetes. Here’s a glimpse at our pipelines. 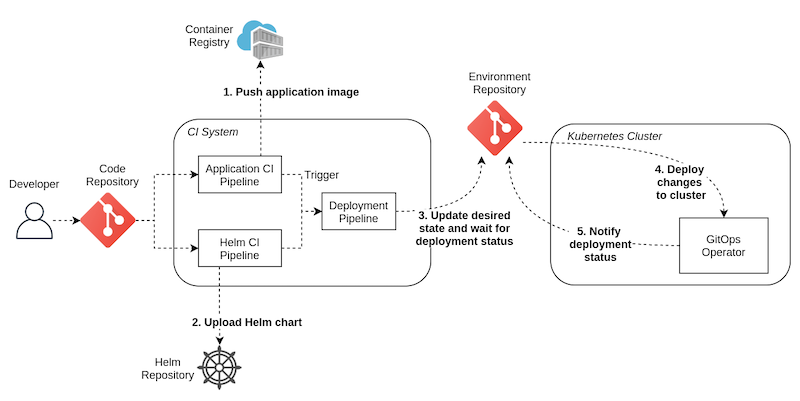 Why Should You Adopt GitOps?

By adopting GitOps best practices, developers can deploy updates and features to Kubernetes more rapidly. With GitOps, you don’t have to switch tools for deploying your application. Everything happens in the version control system used for developing the application anyways.

A change in an application environment requires updating the configuration in the corresponding Git repository. This change creates a complete history of desired state changes, including a record of who made the change and why. Since changes are tracked and recorded in Git, auditing is made easier.

As you have a complete history of changes in Git over time, recovering from failure is much easier. By reverting some commits, we can step back to a state that used to work previously.

As changes go through the Git repository, users and CI systems don’t need to access the cluster anymore. Separation of responsibility between packaging software and releasing it to an environment embodies the security principle of least privilege, reducing the impact of compromise and providing a smaller attack surface.

Backup of the Environment

In case of catastrophic failure, it’s possible to restore the environment quickly as the state of the system is stored in Git. Environment repository acts as a natural backup of the cluster.

What are the Challenges with GitOps?

“Any change, even a change for the better, is always accompanied by drawbacks and discomforts.” ― Arnold Bennett

There is no standard practice on how to manage secrets. To store secrets in Git, we need to encrypt them. This encryption step introduces a separate deployment process for secrets. If they are not stored in Git, then the idea of having your cluster state the same as Git is not valid anymore.

GitOps does not define how to propagate a change to multiple environments. The most popular way of handling different environments is by using different Git branches. To do this, you need to use the CI system.

One of the assumptions of GitOps is that the cluster state is the same as what’s defined in Git. However, your system changes. It could be due to auto-scaling or system tools updating the state of your resources, so this assumption might not be correct.

GitOps shows an opinionated way to implement deployment patterns with specific tools using Kubernetes. It does not provide radical new ideas; instead, it builds on established concepts of continuous delivery. As of today, GitOps is the best way to do continuous delivery using Kubernetes. The prevalence of Kubernetes will lead to more and more organizations adopting the GitOps pattern for their deployment needs. Fueled by increasing the user base and maturity of tools, the GitOps pattern will keep improving Kubernetes deployments

The Benefits of an Enterprise CMS

Agile CMS: The Best of Headless